Dawntown Miami announced the results of their 2013 design competition last week for a forward-thinking landmark for the City of Miami.  Since 2008, Dawntown Miami has been hosting annual design competitions that facilitate a healthy dialogue about the City of Miami and its evolving urban condition.  Competition topics range from new ideas for metromover stations to sewer pump stations to a concept for a seaplane terminal.

We participated in the Dawntown 2010 ideas competition for a new seaplane terminal on Watson Island – located along the Biscayne Bay across from downtown Miami.  Coincidentally, a new tunnel boring connection between the Island and the Port of Miami was completed last week.  Inspired by the unique vantage point of the Island (vis-à-vis the City) and its bio-diversity, our proposal, “The Biscayne Bird,” explores an architectural and urban design solution that both harmonizes with the site’s natural and man-made assets and stands alone as a distinctive public space to see and be seen. 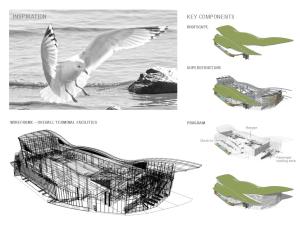 The Bird – a singular massing concept was deployed to optimize the use of the space-constrained site while giving the building its own unique waterfront presence.  The proposal seamlessly integrates public access to the waterfront with the operational requirements of a modern seaplane terminal.  The resultant form at once responds to the Biscayne Bay context while harmonizing with the natural open space that is an integral part of Watson Island. The design’s response to the operational and sustainability objectives raised by the competition resulted in a form evoking the spirit of the seagulls in the immediate area – connecting air, sea and land.